Beaver Scouts are the youngest section our Scouting family.

Their activities are based around making things, outdoor activities, singing, playing games, going out on visits, investigating nature, listening to stories, learning how to be safe and most importantly, making new friends.
Children join our Beaver Scout Colony for many reasons. It might be they have heard great things from their friends about all the things our Colony gets up to every week. Perhaps parents or carers are keen for them to join.
Beavers are aged between six and eight years old, though they can be as young as five and three quarters.

We often have a waiting List and its worth getting your name down on this list sooner rather than later. Ever Considered Volunteering, this may help your chances of getting a space. Just a thought.

A group of Beaver Scouts is called a Colony, and each Colony can be split up into smaller groups called Lodges. Beavers have a Promise and Motto, but there is not a Beaver Scout Law. The concepts of the Scout Law should be presented to Beavers through games, storytelling and other informal devices.

Beavers should have a full uniform of a Beaver Scout sweatshirt, dark trousers and the group scarf. During normal meetings, it is best to wear a tee-shirt (e.g. the Beaver polo shirt) under the sweatshirt to allow the sweatshirt to be taken off during activities.

The scarf, woggle and badges are supplied by the group as part of the investiture; the sweatshirt needs to be purchased by the Beaver. 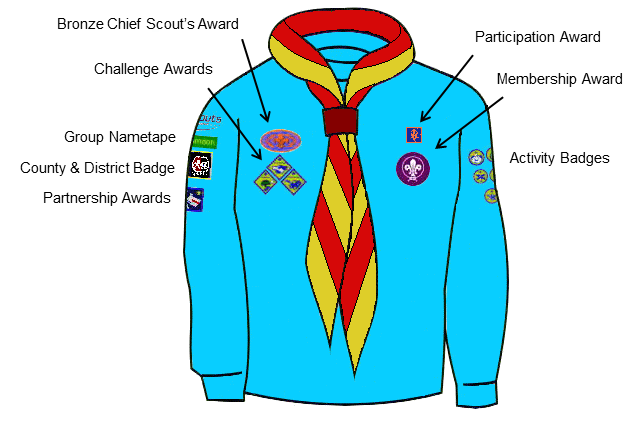 For badges with several levels, such as participation awards and staged activity badges, only the highest numbered badge achieved should be worn on the uniform. The highest number earned in the Beaver Colony for each of these awards can continue to be worn on the Cub uniform until superseded by a higher number.