Young people with a need for adventure and a desire to learn new skills. Who knows what the Scouts could be doing this week!

From camping to film making, shooting to hiking, there aren’t many boring nights.

Scouts are also the section where young people get a real chance to decide how the Troop is run. This is done through Troop forums and Patrol Leader Councils. In Scouting, we call this Youth Shaped Scouting.

Scouts get the chance to practice their leadership skills when they become assistant patrol leaders or Patrol leaders and find themselves leading up to six other young people.

We have two Troops in Hardingstone

Both troops follow their own program relative to the needs of the Troop, but we still get together for things like Camps. We normally go away at least four times a year for nights away experiences. Summer camp this year is in Dorset for 7 nights ad Buddens Scout Adventure and last years summer camp was a week at De Kluis in Belgium. Next year we head off to Kanderstag International Scout Camp

To join the fun, drop us a line scouts@1sthardingstone.org.uk

The scarf, woggle and badges are supplied by the group as part of the investiture; the shirt, trousers and belt need to be purchased by the Scout. 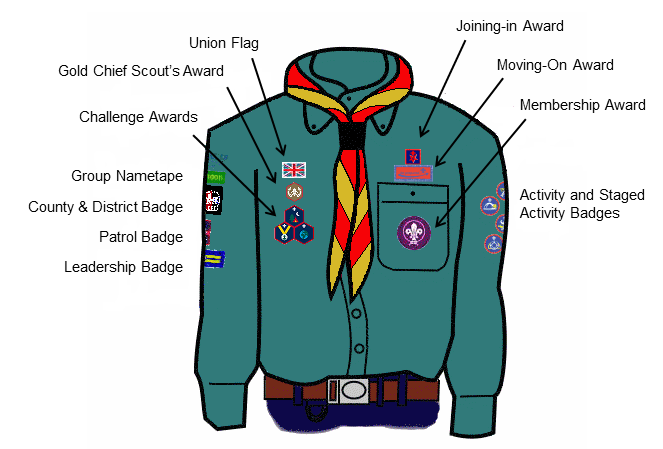 For badges with several levels, such as participation awards and staged activity badges, only the highest numbered badge achieved should be worn on the uniform. The highest number earned in the Troop or previously in the pack or colony for each of these awards can continue to be worn on the Scout uniform until superseded by a higher number.

To assist, the Group Scout Leader and Exec to manage and support the Scout Group’s safety policy. To ensure relevant and practical risk assessments are written for all events and… END_OF_DOCUMENT_TOKEN_TO_BE_REPLACED

Who are Occasional Helpers? Occasional Helpers are adult volunteers who are not taking on a formal appointment but wish to occasionally help out  and due to the nature of that… END_OF_DOCUMENT_TOKEN_TO_BE_REPLACED

What the role involves Section Assistants are adult volunteers who assist the Section Leaders and Assistant Section Leaders in delivering the programme to young people in Scouting.  You are eligible to… END_OF_DOCUMENT_TOKEN_TO_BE_REPLACED