We are now in the Green Readiness Level, removal of restrictions in the uk from the 6th Sept means all activities can resume. Covid 19 will form part of standard risk assessment.

Cub Scouting is one of the great success stories of the last 100 years.

From an experimental camp for 20 boys on Brownsea island in 1907, it has spread to 216 countries and territories, with an estimated 28 million members.
Cubs is the second section of the Scouting movement, originally started in 1916 for younger brothers who wanted a ‘look-in’. In nearly a century, the section has constantly evolved and adapted its programme and methods to meet the changing needs of each generation of young people, and these days admits girls as well as boys.
Cub Scouts are young people aged between 8 and 10 1/2, who make up the second section of the Scouting family, between Beavers and Scouts.

Under some circumstances, Cub Scouts can join the Pack as young as 7 1/2 if, for example, they have friends joining at the same time, or are mature enough to move on early from Beavers, (and there is space in the Pack). Such decisions are taken by Cub and Beaver Scout leaders.

During their time in the Pack, Cub Scouts will get a chance to try lots of different activities like swimming, music, exploring, computing and collecting.
There are a range of badges available which Cub Scouts can wear on their uniforms to show everyone how well they’re doing.
Cub Scouts also get to go on trips and days out, to places like the zoo, theme parks or a farm. Sometimes they will be able to go camping with the rest of the Pack and take part in all kinds of outdoor activities.

A Pack of Cub Scouts is organised into Sixes, with each Six named after a colour, and a Sixer and a Seconder in charge.
The recommended maximum size of a Cub Scout Pack is 30 Cub Scouts. To meet local circumstance this maximum number may be increased, either in the long term or the short term with the agreement of the Group Scout Leader.

Cubs should have a full uniform of a Cub Scout sweatshirt, dark trousers and the group scarf. During normal meetings, it is best to wear a tee-shirt (e.g. the Cub polo shirt) under the sweatshirt to allow the sweatshirt to be taken off during activities.

The scarf, woggle and badges are supplied by the group as part of the investiture; the sweatshirt needs to be purchased by the Cub. 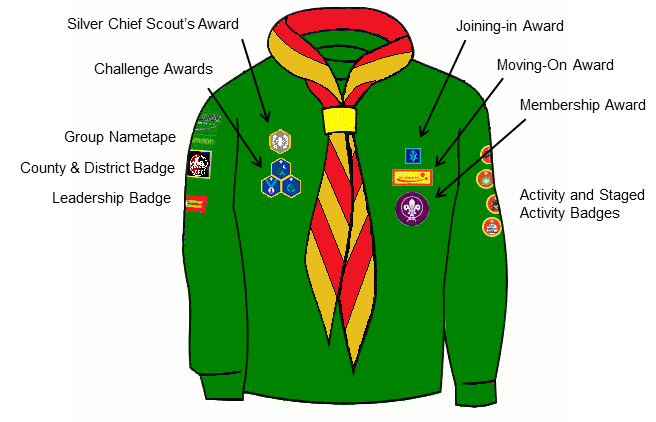 For badges with several levels, such as participation awards and staged activity badges, only the highest numbered badge achieved should be worn on the uniform. The hghest number earned in the Beaver Colony for each of these awards can continue to be worn on the Cub uniform until superceded by a higher number.

To assist, the Group Scout Leader and Exec to manage and support the Scout Group’s safety policy. To ensure relevant and practical risk assessments are written for all events and… END_OF_DOCUMENT_TOKEN_TO_BE_REPLACED

To assist, and deputise for, the Group Scout Leader to manage and support the Scout Group and its Leaders to ensure it runs effectively and that Scouting within the Group… END_OF_DOCUMENT_TOKEN_TO_BE_REPLACED

Who are Occasional Helpers? Occasional Helpers are adult volunteers who are not taking on a formal appointment but wish to occasionally help out  and due to the nature of that… END_OF_DOCUMENT_TOKEN_TO_BE_REPLACED

What the role involves Section Assistants are adult volunteers who assist the Section Leaders and Assistant Section Leaders in delivering the programme to young people in Scouting.  You are eligible to… END_OF_DOCUMENT_TOKEN_TO_BE_REPLACED